Let’s talk about charge, change, and zero point. Maybe instead of running words around in circles, we can break the mold and find a new thing. Surf the waves of transformation with me as we get sciency for a bit. This all ties in with the most recent message from The Master, “Love Your Enemies, and Come Close to the Arc.” Typically cryptic, it begs for exploration. Science hat on, let’s go. 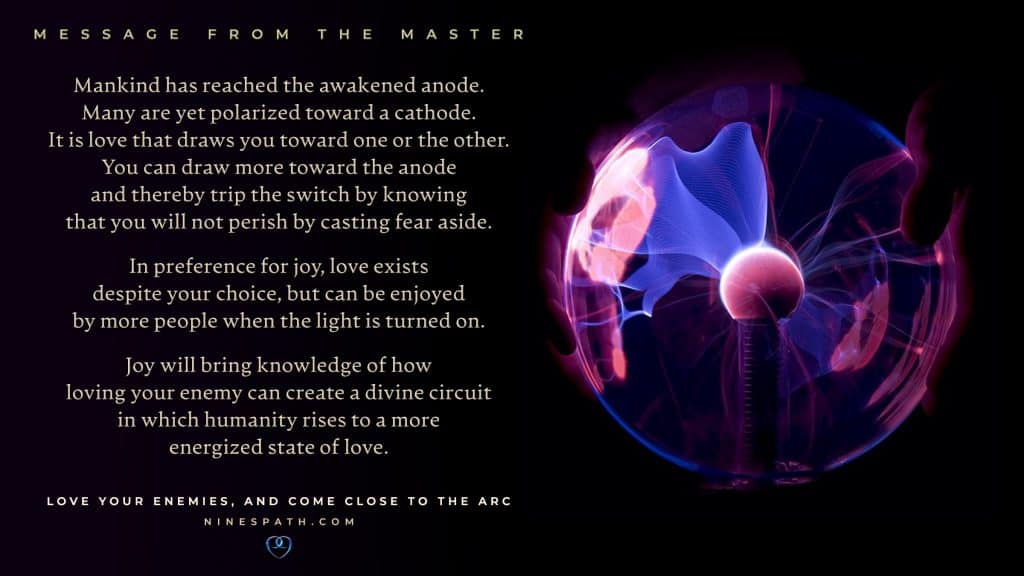 Electricity is really a weird and wonderful thing. It can switch polarity. It can arc through the nothingness of seemingly empty space, skirting on little more than attitude. Positive and negative can hide their opposite, rush headlong toward what they are not, and in the process of flooding a circuit, turn darkness into light. It’s only natural for a holographic mind to juxtapose the observations of nature onto the experiences of a more spiritual intangibility. The results tend to be the same: Darkness to light, fear to joy.

This idea of joy being at the heart of the process of transformation can be a challenging one to wrap around. After all, there is implied within change a leaving of home, an encounter with the unknown. So often we imbue that with fear. It’s only natural, given the environment in which we have grown. The medium is saturated with chaos, separation into polarity forced and the flow of energy controlled to feed a system not of our own control. Well, it seems a worthy metaphor. Flickering torch in hand, we walk through the darkness of unknowing without fear. Let go of what you know you know, and be scientific about it. That means not assuming, but to hold the open space of mind to receive the truth in whatever form it appears.

Generally, in powering a light bulb, for instance, the flow of negativity (electrons) moves from anode to cathode. Taken to its extreme, an anode could conceivably diminish to nothing as it loses ions while a cathode solidifies, densifies, having gained them. What’s an awakened anode? What are you giving your power to? What’s absorbing your negativity? Those yet polarized toward a cathode pour negativity toward it, whatever “it” is. Toward your enemy. Toward what you hate. Toward resistance. Emotion powers the movement. Light flickers against the brilliant fusion reactor of love’s core nature.

On this polarity of joy and fear, light and dark, and the appearance of the unexpected new, I refer to a private conversation with the crew, in which the concept of zero leads to an opening to a new reality. They were speaking of the local data set accruing around current situations (apply to your own reality, here):

“Local data refers to all the incidental fluctuations within the whole of humanity’s experience. The emotional component of the Earth is uncertain by nature. The amplitude of the energy of emotion is not easy to predict with any degree of certainty. To assume to be able to is foolish at best, reckless at the extreme. Remember that you are taking the charge from memory, thus rendering its emotional charge zero.

“Generally, you have a unique emotional signature, an imprint that lay over the rest of your energy signature. Then this reaches zero, you can be considered Pleiadian. Know that Pleiaidans do have emotions, but they allow them to move. They have learned how to do this to a point of mastery. Humans of Earth tend to control or block emotions, leading to a lot of psychic distress and other problems. As you zero your emotional layer, you become more fluid and more functional. Because the Earth population has so much emotional flux, what leads to a ham radio signal becomes absolute static. Finding the right frequency to pinpoint a voice is one thing, but to find a safe entrance is another. Thus, we cannot tell you exactly when.

“The only kind of emotional energy that creates a stability in which an entrance can be secured are the isolated emotions of fear or joy. Only a stable projection works. Either frequency tainted with kinetic fluctuations of the derivations of either obscures the entrance. Pure joy or pure fear are the only options. The more the world modulates toward joy, the clearer the field becomes. Calm soul-aware meditation is one of the best ways to stabilize the field into a frequency dialed to a joy-based clear signal.

“Therefore, be rigorous as you do the work of detaching yourself from past and future. Let the action of modulating all other frequency modulations toward joy do the work of compressing while you are left holding perfect crystalline form you can receive as a thing of beauty. With this as the left-over material from a life of emotional intensity, you will create for yourself a thing of great value, a tool for finding your way home and a souvenir of your experience of living on Earth. All are beautiful, all are prized, all are perfect. All are divine creations in which the signature of God is apparent. Put yourself into the discipline of doing this. Knowing that as you do, you clear the field for joy to open its door wide. When joy overtakes the planet, all fear will be crushed and incapable of finding a foothold in which to reestablish itself. Thus can you banish fear from your world. When you do, the planet will be eternally shifted into her natural state of fearless joy. Find fear and generate joy by holding on to love and trusting love to hold on to you. Release all that is not love and collect your jewels when you order your heart to take a look at what love has wrought. Encourage each other to do the same.”

What happens when the anode modulates the negative charge, when it’s plugged in to fundamental, chargeless love rather than a sea of polarity? Negativity can modulate into transformational awareness, crystallizing density into a new state of being. This is the ultimate act of love. Step out of the paradigm of being a battery, into the unlimited power of free energy. Zero flips the switch. Zero in on fear, in all its manifestations. Barriers to freedom are mere vestiges of memory’s charge, whether built on personal experience or collective programming. Be joy.

Explore more of the world through the lens of Nine, as shared in the transmissions and vibe of the League of Light, in the Pleiadian Renegades Facebook group. And as always, I honor your support, presence, and loving network of fearless being.

A note about the title of this writing. I can’t help but laugh at the endless wit displayed at every encounter with these sources of higher wisdom. The title “Arc and Love”, while touching on the themes of electricity and love, is truly a play on words. I must elucidate. My home state of Maryland, in the United States, was originally settled by western colonists who traveled there on two ships, the Ark and Dove. Maryland’s nicknames include The Old Line State, referring to the (polarity?) boundary between North and South, and The Free State. While this latter name stems from a protest of prohibition laws in the 1920s, Maryland has always had a tradition of religious and political tolerance… but I can’t help notice a sly glance toward the state of free energy. 😏

Step out of the paradigm of being a battery, into the unlimited power of free energy. Zero flips the switch. Zero in on fear's manifestations. #ninespath #transformation #leagueoflight Click To Tweet

It's time to revisit this one. "The façade is falling, along with the structures that had held it in place." https://t.co/lF3bSDT9or